PRENSA LG CHEM. The Santa Barbara desalination plant located in the south-eastern part of Curaçao provides drinking water to about half of the population of this Caribbean island. With an average precipitation of approximately 500 mm, rainwater is the only natural source of freshwater in the island. Government efforts to address the water shortage problem date back to the 20s of the last century. Initially based on evaporation, the seawater desalination evolved into the reverse osmosis technology in the 90s. After several years of experimenting with RO, Aqualectra, the municipal supplier of potable water and electricity for Curaçao, took the decision to move forward with this technology and in 2003 started a project to build a SWRO desalination plant.

The original plant was built and commissioned by Degremont (nowadays Suez) in 2005 and produced 18,000 m3/day of drinking water. Originally designed for an open intake, the plant was later converted to an infiltration gallery intake with the silt density index (SDI) less than 1.5. It was one of the first full-scale plants applying stringent regulations on TDS (<150 mg/l after remineralization) and boron maximal concentration not exceeding 0.5 mg/l. To achieve those targets, the plant had three double-pass trains, with the first-pass trains consisted of 92 vessels each and the second-pass trains of 27 vessels each (2:1 staged).

It didn’t take a long time to realize that the plant expansion was needed because of the increasing demand for potable water. In 2012 the plant went through the expansion by addition of the fourth single-pass train to increase the water production to 25,100 m3/day. This became possible because of the revised water regulations, particularly with respect to the boron concentration increase from 0.5 mg/l to 1.0 mg/l. The permeate production of the additional rack bypassed the existing second pass maintaining the product quality within the specification after blending.

During the expansion, Aqualectra and Degremont looked to LG Chem to supply Thin Film Nanocomposite (TFN) seawater RO membranes. A hybrid membrane design utilizing TFN SWRO membranes was implemented in the expansion train. The hybrid configuration is a combination of two or more different membrane models within the same pressure vessel. The typical configuration consists of placing low flux elements in the lead positions, feed end, of the pressure vessel and higher flux elements in the rear, tail end. This design is used to balance out the flux and recovery within a pressure vessel and eventually increase the production capacity and lower the feed pressure and energy consumption.

The membrane design of the expansion first-pass train consists of a hybrid of two low-flux elements, LG SW 400 SR and five higher-flux elements, LG SW 400 R. By using the LG Chem TFN membranes, the production capacity was achieved with just 65 pressure vessels, compared to the 92 vessels required by a conventional first-pass design. This allowed the plant to operate the new train at a significantly higher average flux and the same feed pressure to reduce CAPEX by decreasing the number of pressure vessels in the expansion train compared to the existing first-pass trains. Moreover, the new design resulted in a better product quality than the first-pass product from the existing trains. Based on these results, the membranes in the remaining first-pass trains were later replaced with the LG Chem TFN membranes of the similar design reducing the number of pressure vessels of the first pass from 95 to 72 per train and converting the plant into the full two-pass production.

Today the plant produces the total of 24,000 m3/day of water of the highest quality. The LG TFN membranes are installed in all four first-pass trains. Figure 1 shows the normalized performance of the RO trains for the past six years. The results demonstrate that the permeability of the nanocomposite elements as well as their salt passage remain stable over six years of operation. The normalized differential pressure remains stable too which implies low fouling of the elements. 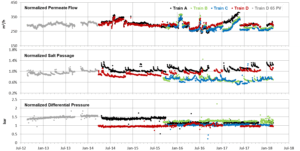 This case shows the benefits of using LG Chem TFN membranes in a hybrid configuration to significantly increase the system flux and lower capital without compromising the product quality and the performance stability over time.